This morning the Sun City ARC conducted it’s last scheduled VE session for 2021.  This morning we had a special guest at the session.  Lizette Ruiz, a representative of Congresswoman Veronica Escobar came to observe and to learn more about what we as volunteer examiners do, and how our candidates get licensed.  We have communicated in the past via email, snail mail, and telephone conversations.  Today we had the opportunity to show her what was previously done by the Federal Communications Commission, FCC.  We let Lizette know that upon completion the candidate information will be uploaded to the American Radio Relay League’s, ARRL, computer, and Monday morning that material will be processed and uploaded by the ARRL to the FCC computer.  With our volunteer efforts, the League’s hard work to get these initial and upgrade licenses processed into the FCC computer it’s hard to image why the FCC thinks our candidates should be a money stream for them.  I’m hoping we can be exempted from this charge.

We know this was in the works, and I felt no reason to NOT try to get it curtailed.  If we DON’T try, we already know the outcome, If we try and fail, at least we tried.  Off to the post office to forward the paper now that the document upload is done. 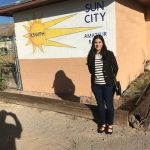 The club is still vibrant  and weathered the COVID storm quite well. Happy to have more recently licensed Hams as officers. Looking forward to having our regular club events again into the new year. Visit us at the clubhouse.
We hope everyone stays well throughout west Texas and beyond.
73
Martin Raue, WB5LJO
k5wph. org

Back in the early 1980s there was a ham radio two-meter link system known as the Zia connection that extended between New Mexico and Arizona and into El PASO. The repeaters utilized Motorola railroad radios that were readily available, and they lasted a long time.

Back in 1985, Martin WB5LJO decided to build a nice repeater (147.240) for the Sun City Amateur Radio Club utilizing the same Motorola Motran radios. This repeater continued to operate just fine all the way till last Tuesday, 7/6/2021, upon its disconnection.

During that time, there was also added a GE master radio for our UHF repeater (443.400) and then an old Motorola Motrac 420 MHz link to the “Amigo Link” about 20 years ago. All of the equipment was getting old and since the frequency on 420 needed to be changed anyway to 430 MHz, it was time to swap out the whole works with new equipment and get rid of the large, enclosed rack that cluttered up the Ham shack. There is now a nice open rack with new Kenwood repeaters using an RLC Linkcom controller.  Everything is working wonderfully, and it sounds and performs really well.

Thanks go to those that donated equipment to this project, SCARC really appreciates your help.

The coverage area of the new repeaters was tested. Sean, KD6CUB, drove through the far east side of El Paso County, he was using the 2 repeaters and getting radio checks from a couple people along the way. Google Map snapshots were taken along the way so we could easily see the exact range of the repeaters. The farthest place way from the repeater along the pipeline was 22.5 miles away, that was in the valley east of San Elizario, TX.

Only using a 10-watt radio with a mag mount antenna, nothing special, and had very good reports all the way.

Over the last couple days since the rebuild, other testing was done around town. VHF/UHF “knife edging” can be pretty amazing with a well performing repeater as both machines are usable in a lot of areas west of the Franklin Mountains. Someone using the 147.24 repeater from near Las Cruses NM this morning was very noisy into the repeater but very readable. 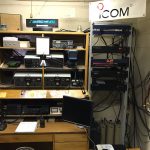 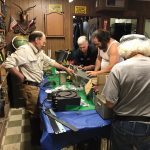 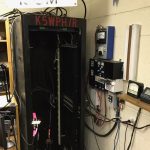 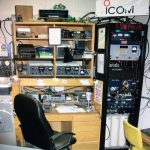 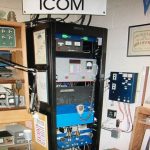 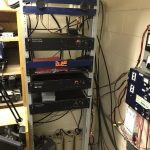